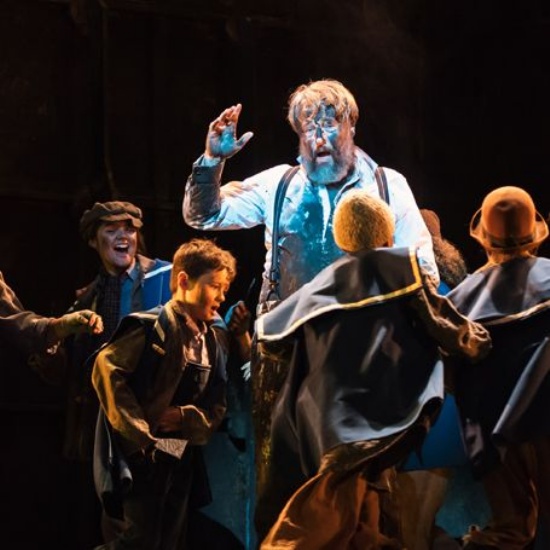 Tiger Bay the Musical opened in the Wales Millennium Centre, Cardiff in November 2017. It had a cast of 30 amazing actors including John Owen Jones (Welsh musical theatre actor and singer), Noel Sullivan (Hear'Say) and Vikki Bebb (Leading Lady in Tiger Bay the Musical).  I was extremely privileged to be a part of this cast.

Tiger Bay the Musical tells of a story about a young woman, Rowena Pryddy, who was determined to challenge and change the injustices of society during the turn of the 20th Century.  Within the musical there are many different characters, ranging from street orphans called the Water Boys who are experiencing extreme poverty to the extremely wealth Third Marques of Bute.

The musical examines the relationships between different classes and societies of people and how hard life was for those of the poorer classes in the early 1900’s. The musical highlights a massive turning point in history showing different views from alternative standings in society.

In the musical I took on the role of a Water Boy called Oscar, Scar for short.  The Water Boys are orphans who lived on the streets; they had no family or anyone to protect them and weren’t afforded the luxury or the opportunity to go school. Their way of getting money and food was to work for the Donkey Men. The Donkey Men were men who pushed the carts of coal down to the docks; ready to be shipped all over the World.

During the show the Water Boys are kidnapped and thrown on a ship which was converted into a special school for them. However they end up being beaten and tortured and are starved until the third Marques of Bute rescues them.

I really enjoyed playing the part of a Water Boy as it pushed me out of my comfort zone, at first it was quite difficult to play the part of a boy, however, as the rehearsals progressed it became a lot easier.

The best thing about being in the musical is not only the amazing experience I’ve gained, but making lots of new friends who are like a second family to me. Some of the friends I made were not only local ones but those from South Africa too.

During rehearsals we learned words and phrases in Zulu and Afrikaans and practiced different physical and vocal warm ups.  Even though we performed the musical a number of times over a two week period I never got bored or tired of it and always performed to the best of my ability.   My favourite part of it was the big musical number where all the Water Boys were on stage singing, dancing and acting.   Even when we were off stage we continued singing and dancing along.

Overall it was an incredible once in a life time experience that I will never forget.

On Tuesday 21st November Years 8 & 10 Book Club went along to the Wales Millennium Centre to see Tiger Bay The Musical. After a busy train journey we arrived and took our seats. The anticipation increased as we waited to see our friend Lowri Hughes take on the role of Oscar, a Waterboy from the musical. Eventually, the show started and we saw Lowri take to the stage.

Tiger Bay The Musical is set in the early 1900s and tells the story from many different perspectives, at a turning point in history when the coal industry is thriving and poverty battles wealth. One of the main characters Rowena, a shop worker at David Morgan’s department store, rebels against society’s racial and sexist inequalities.  On the streets of Cardiff’s Butetown a revolution is imminent and gangs of street children inhabit the alleys that surround the docks.

The show finished to a standing ovation and a few tears were shed.  Tiger Bay was the best stage performance that we’ve watched with school, but our favourite part was the opening scene because it was so powerful and we saw Lowri fulfilling her role as a Waterboy, greasing the tracks for the Donkeymen to push their coal carts down the Bute railway track.

We wanted to support Lowri in her role and we thought she was amazing, showcasing her talent well. We believe that this has been a great opportunity for her and we are incredibly proud that she has achieved a lifelong dream, performing on a stage in a show as big as Tiger Bay.

The show took us back to Cardiff Bay in the 1900’s, when the area was known as Tiger Bay.  It was an interesting show, the loud noises at times made us jump and some found the story a little sad, but overall we really enjoyed it.