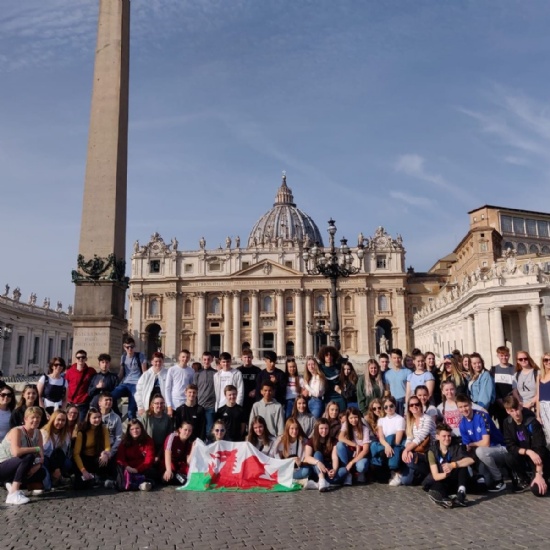 During half term, the Religious Studies Department took 51 pupils to Rome. Although functioning as a vibrant, modern day capital akin to any in Europe, the unique appeal of Rome is that the entire city is a vast 3,000-year-old museum. In every quarter we found ancient monuments, art treasures and timeless architecture in churches, galleries and protected ruins.

Our tour of Rome started with a visit to the Colosseum, the largest ever amphitheatre built in the Roman Empire. Even today you can observe how one of the greatest works of Roman architecture was used for gladiatorial contests and public spectacles. Pupils visited the Roman Forum and Palatine Hill, the once-bustling heart of ancient political, judicial and commercial power.

Throughout the afternoon and early evening, students and teachers wandered the winding cobbled streets, stopping to eat gelato outside the Pantheon, shop at the Spanish Steps and observe the Trevi Fountain.

Day three included a visit to the Vatican City, the world's smallest nation, covering just 120 acres. Within its walls are the ornate St Peter’s Basilica, the astonishing Sistine Chapel and the Vatican Museum. We were all totally overwhelmed by the astounding artwork; Michelangelo’s ceiling must be one of the most spectacular works of art in the world!

Day four of our tour included a visit to the Great Synagogue of Rome and the Catacombs of San Sebastian. Forming an underground maze in the outskirts of the city, over 40 catacombs provide a glimpse into the world of early Christianity. Along with countless burial chambers that line the tunnels, the catacombs contains some of the earliest examples of Christian artwork.

All students who attended the visit to Rome must be commended on their excellent behaviour and attitude. All students were a credit to the school, and as a department we are extremely proud of the way in which they represent St Cenydd - da iawn!